The organs of Pereboom & Leyser 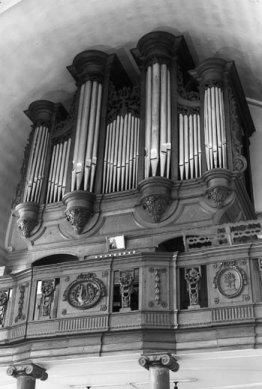 The organs of Pereboom & Leyser

Theodoor Pereboom (1828-1903) and Jan Leijser (1821-1903) established themselves as organbuilders at Maastricht in 1850. The musical culture of this city, located in the southern of the Netherlands, was influenced by Paris. The early organs of Pereboom & Leijser have a forte Grand Orgue and a piano Positiv in a swell box. The stops of the Grand Orgue have their counterparts on the Positiv. After 1857 the swell box is no longer included. The Bilingua (G.O.) is replaced in the dispositions of new organs by Flûte travers, the Euphone (Pos.) by a Basson-Hautbois, then Flageolet (Pos.) by a Doublette. The Pedal is enlarged with a Flûte 8.

After 1865 the Flûte travers on the Positiv is replaced by Voix céleste and Mélophone; the Grand Orgue is given a Flûte harmonique, the Positiv a Flûte douce 4 (Dolcé 4 after 1870).

After 1876 a radical change takes place, presumably as a result of the building of the large organ at Ste.-Foy at Luik (Liège). Wind pressure is now 80 instead of the former 70 mm., the divisions are divided, the strings are sounding sharper. The Récit is placed in a swell box. In the 1880s on two-manual organs a Cornet replaces the Fourniture.