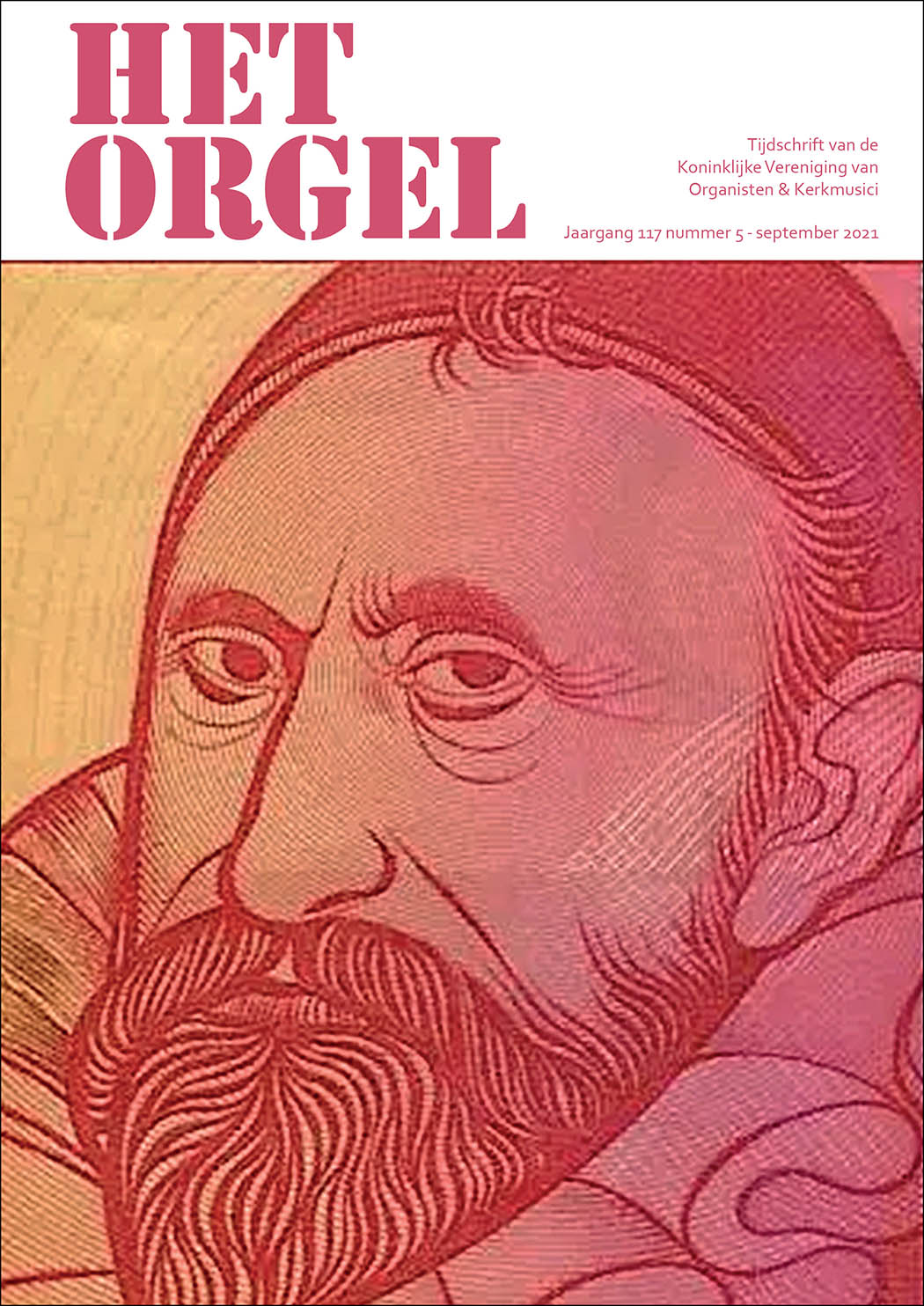 The September, 2021, issue of Het ORGEL is dedicated for a large part to Jan Pieterszoon Sweelinck, who died 400 years ago.  Sweelinck specialist Pieter Dirksen wrote a fascinating analytical article on the Ricercar a1 (SwWV 280).  He shows among other things how this composition exhibits  all the characteristics of the ‘classical’ Sweelinck fantasia.
The celebration of Sweelinck’s birth and death years is in our time a matter of course.  But for centuries that was not the case.  Jan Smelik’s article concerns the Sweelinck revival that began in the 19th century.  Smelik describes the period up to 1934, the year in which Bernhard van den Sigtenhorst Meyer’s book ‘Jan P.  Sweelinck en zijn instrumentale muziek’ appeared.  The article describes the role of Het ORGEL and of the Nederlandsche Organisten-Vereeniging (NOV) in the process of re-evaluating Sweelinck.  The famous controversy between the NOV and Jan Zwart in the early 1930s is addressed, because Sweelinck’s memory was an important theme.  Commemorating a national hero of the 17th century could unite the Dutch then, but could also give rise to enmity and misunderstanding.

The rubric ‘Een eeuw geleden’ [A century ago] contains a short article by Herman Rutters from the October issue of 1921.  The editor of Het  ORGEL at that time was greatly concerned about the commemoration of the 300th anniversary of Sweelinck’s death on 16 October.
Jos van der Kooy, in his column ‘Levenslang Sweelinck’ [Sweelinck for life] describes how he first made the acquaintance of the ‘Orpheus of Amsterdam’, and how Sweelinck has accompanied him during his career.  An ego document that indirectly provides a brief description of Sweelinck reception since WW2.

Sweelinck was in the 17th century primarily influential in North Germany, via his pupils.  His art was further developed by pupils who transmitted it to their own pupils.  That was the case for example with Johann Adam Reincken, a pupil of Sweelinck’s pupil Heinrich Scheidemann.  Christiaan Clement writes about Reincken’s famous chorale-fantasie ‘An Wasserflüssen Babylon’.  Using an analysis of musical figures, Clement investigates which of the 6 verses of the poem (an arrangement of Psalm 137) Reincken may have had in mind.  A fascinating study.

Geerten Liefting attended the 3 rounds of the International Organ Competition in Haarlem.  What were the improvisation assignments like?  Did they offer the candidates sufficient possibilities to display their talent?  And what did the players achieve with the assignments?

Auke H. Vlagsma wrote an In memoriam for Teus den Toom, who died on 19 July at the age of 77.  Jan R. Luth commemorates Jan van Biezen, who died on 24 July, 94 years old.

Sietze de Vries reviews the book ‘De aristocraat onder onze historische orgels.  De orgels van de Oude Kerk Amsterdam’ [‘The aristocrat of our historical organs.  The organs of the Oude Kerk in Amsterdam’].  He concludes:  “a fantastic reference work, that can be read like an exciting novel.”

Albert Clement calls attention to the ‘Mendelssohn Handbuch’ that appeared last year, edited by Christiane Wiesenfeldt.  Is this handbook up to date?  Does it meet our expectations?

Frits Zwart closes the issue with part 2 of a trilogy on the organist Marinus van ’t Kruijs (1861-1919).  This part covers the period when Van ’t Kruijs lived and worked in Groningen.  He met with quite a bit of trouble there.…