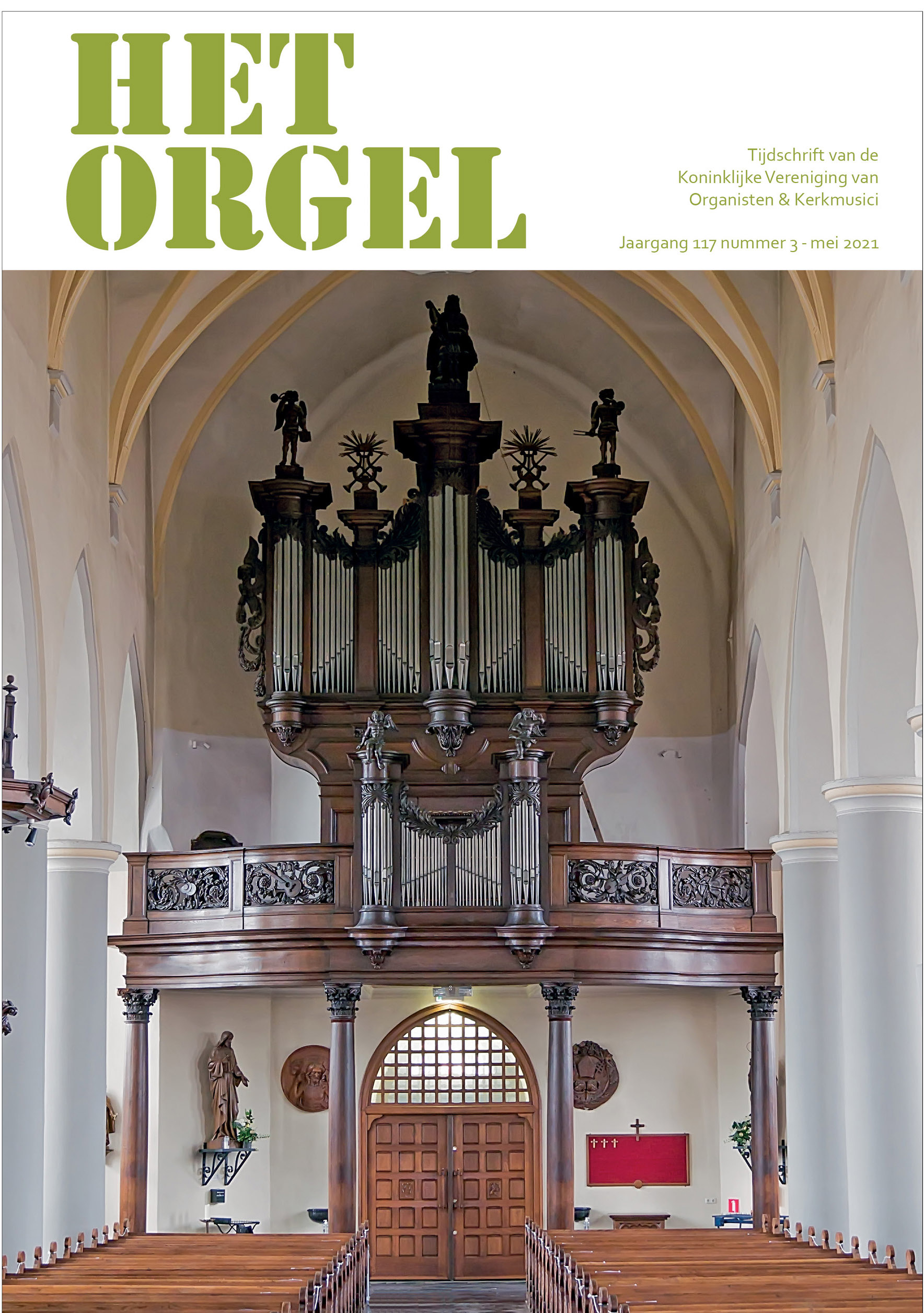 The issue of May 2021 opens with the first part of an article by Iddo van der Giessen on the history of the Flentrop organ in de Doelen in Rotterdam. He discusses the history from a special point of view:  the use of the instrument by the two organists Arie J. Keijzer and Geert Bierling.  In the first part he discusses the history and characteristics of the Doelen and the Flentrop organ, the appointment of Keijzer, and his complete performance of the organ works of Johann Sebastian Bach in the 70s.

In his column ‘Herdenken’ {Remember} Jos van der Kooy writes about one of his teachers, the organist Evaristos Glassner (1912-1988) who as ‘Halbjude’ {half-Jew} fled to the Netherlands from Germany in the 1930s.

In the second part of his diptych on Cornelis Rogier and his notebook, Frans Jespers discusses some new insights on organs of Rogier.  He draws attention to the possible teacher of Rogier, to the form of Rogier’s cases, and to the painful conflict between the organ maker and his own church trustees.

In the rubric ‘Een eeuw geleden’ {A Century Ago} there’s an article by J.W. Enschedé from the May issue of 1921. He was worried about the future of the Dalstein & Haerpher organ, that was then in the Nieuwe Walenkerk in Amsterdam, and that is now in the RC parish church Onze-Lieve-Vrouw-Visitatie in Budel.

In July of 2020 the firm Van Rossum (Wijk en Aalburg) completed the restoration of the Clerinx organ in the Sint-Lambertus church in Nederweert. Rogér van Dijk, consultant for the restoration, describes the history of the organ and the most recent restoration. Cees van der Poel, who knew the instrument before the restoration, gives an impression of the sound of the renewed organ.

In the January issue there was an article by Marie-Louise Langlais on the tempi that César Franck noted in his organ music, particularly in his ‘Prélude, Fugue et Variation’.  Piet van der Steen wrote a reaction to this article, to which Ms. Langlais responds.

The contribution to the rubric ‘De Achterplaat’ {the back page} is entitled: Marco Enrico Bossi – organ virtuoso with ‘something martial in air and movement and very courteous manners’.  Frits Zwart describes the contacts that Bossi had with the Netherlands, and in particular with Willem Mengelberg.