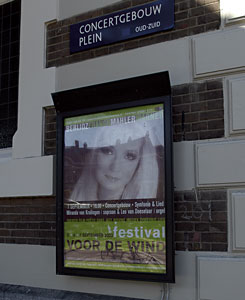 The organ festival VOOR DE WIND took place 5-7 September 2003 in Amsterdam (voor de wind is a Dutch expression, meaning that one is doing well, like the sailing boat that is propelled by the wind). It consisted of twelve concerts in seven churches, the Concertgebouw and on the streets (carillons, barrel organ on a boat). Its purpose: to convince a new audience and concert organisations that the organ offers fantastic possibilities when it is presented as a secular instrument.
The quality of the concerts was high. To name just a few: Joost Langevelds accompaniment of the movie Faust (1926) was very convincing, as was the jazz concert with Bert van den Brink and others. The childrens theatre piece The Little Prince, with Gonny van der Maten, was successful, as was also the concert Van der Maten gave based on poems by Paul van Ostayen. The diversity of the festival program was enhanced by the large number of new compositions written especially for the occasion; for example Jan Welmerss Running, played by Janine Jansen (violin) and Jan Jansen (organ).
The festival had to compete with many other festivals and was less effective than it might have been since some of the organs werent quite the best that Amsterdam has to offer.