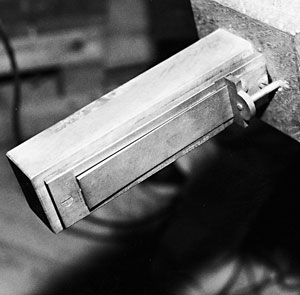 As a result of the Orgelbewegung in the early 20th century, free reeds lost their good reputation. Nowadays they are built and respected again.
Christian Gottlieb Kratzenstein (1723-1795) was the first to use the free reed. He did so in his speech machine, which was capable of imitating vowels. The machine was built as a tool for scholarly research.
It is generally believed that Kratzenstein based his free reed on the ones in the East-Asian mouth organ, the Sheng; and that his reeds had no tuning device, prohibiting their use in organs. Neither of these ideas is correct, as can be concluded from the text that Kratzenstein sent to the Academy of Sciences in St. Petersburg in 1780.
Up to now, it is uncertain whether Kratzenstein developed the new reeds alone. It is possible that the organ builder Franz Kirschnick and his pupil Georg Christoffer Rackwitz assisted him. Historical sources point out that Kirschnick was one of the first to build free reeds.
Conclusion: 1781 is the birth year of organ stops with free reeds.