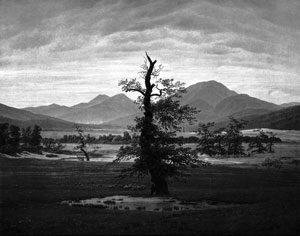 A common aspect of many organ pieces from the decades around 1800 is that they are less progressive than other compositions. Beethovens First Symphony or Haydns Die Schöpfung were much more modern than the neat music or the trite improvisations (on themes like the battle of Waterloo) that were played on organs.
Romanticism thus developed quite late in organ culture, although Johann Christian Kittel pointed out as early as 1801 that nature provided examples for the dignity that should characterise organ music. On the other hand, the quality of classic organ music was not as high as that of other classic music. In this way, organ music was a compromise between Romanticism and Classicism.
The Battle of Waterloo was not the only new aspect of organ music. English composers presented new voluntaries, and the organ concert became a genre in which orchestral music was imitated. For the rest however, organ composers worked in a traditional way: their Sonata still followed the 18th-century one-part-form, and Variations on a Theme were written in multitudinous examples, as were also Preludes and Fugues. Of course  since the organ was still considered an ecclesiastical instrument  organists wrote many chorale-preludes.
A new phenomenon was the organ school, like the ones published by Knecht (1795-98), Kittel (1801-1808) and Rinck (1820-1821).
It is regrettable that the three great Viennese composers did not write more organ music: their pieces for automatic organs are of high quality.