Historicism in the 21st century by Hans Fidom 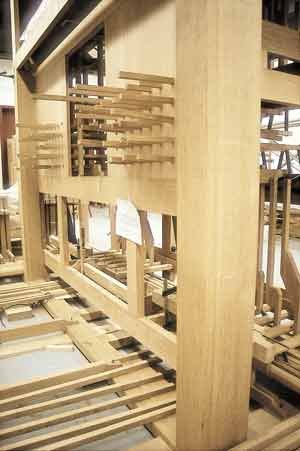 The neworgan in Örgryte Nya Kyrka in Göteborg (Sweden), built in 17th-century North-Germanstyle, sounds very convincing. The discussions in het ORGEL show, on the otherhand, that historicism is not supported by all organists. Consequently, the question ofthe significance of historicism in the organ world of the 21st century requires someattention.

Considering art as a means of communication indicates that an organist has to deal withthree filters between what a composer wants to say and what the public detectsof this message. These filters are determined by the possibilities of the organ, thepossibilities of the organist and the difference between the frame of reference of thecomposer and that of the organist. Especially in the case of ancient music the thirdfilter deserves serious consideration.

If the organist is regarded as an artist, a situation occurs in which the organist canlegitimately decide how to transmit the composers intention to the public; he canchose to take advantage of the effects of the filters. Knowledge of the composition mayinspire him to make certain artistic decisions, for example, to try to make the filters astransparent as possible (which would meet the demands of historicism); but the organistmight equally well choose to do otherwise in order to improve the quality of his artisticcommunication. Of course, knowledge needs to be acquired before one can make a choicewhether or not to use it: the artistic communication of most artists who pretend not toneed such knowledge tends to be boring quite soon, as they have no reservoir ofpossibilities to chose from.

The public has to cope with a filter as well: its frame of reference is also not thesame as that of composers.

The festival, as it has developed in the historicising scene during the past 30 years,offers great opportunities to transmit knowledge to organists and their public, as it isin fact a meeting-place for organists, composers, public, organ builders, andmusicologists.

Looked at this way, historicism is of great importance with respect to the future. Atthe same time it may be clear that other options are of no less importance; options thatprovide the organ world with the conditions needed to stimulate contemporaryinterpretations of both ancient and new music, and the cultivation of improvisation aswell.